Posted by Gio Bard Zero at 2:00 PM No comments:

I Want To Set Free My Heart 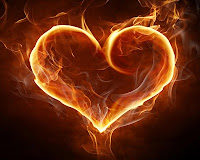 I want to
Set free my heart.

The rest of me
Like shackles
Weighing it down
As if to protect it
From the inevitable.

"Get out of your own way"
I hear periodically.

I want to
Set free my heart.

I want to
Open up
And let the rest of me
Stretch outward
From West to East
From South to North
Vice versa
And everything in between.

*
What would we do without stories? Hell (Heaven?), that would be a story in it of itself. We are humans and we love stories. Interpreted by us, any succession of events could tell a story. A different story too - depending on who you ask! To good imagination, nothing is random. Everything is alive, changing constantly. If you do not see it, you're not looking. We have an eye for change and a knack for meaning. We dip a proverbial paintbrush in our pallet of meaning and begin our work on the canvas of Life.

Then the guy (gal?) who's not looking cries out - "It's all meaningless! There is no story nor any storytellers. Everything passes and amounts to nothing in the end!"


What a story that is. So maybe it does all amount to nothing. But maybe that's precisely the point. After all, what's a good story without a good ending? And what's an ending, if not a stopping point - the gateway back to nothing? Rest, relaxation, and - dare I say - silent appreciation? You see, "No-thing" makes the whole Wondrous Thing possible. A blank slate is space within which a story is weaved. It begins there and it ends there. And with every end, you are left with the question - "now what?"

Well... We're back to nothing! All stories are just journeys from nothing to nothing and every one of them is chalk full of meaning - it HAS to make sense! That's the only way it'll come full circle. And yet the ultimate story of everything and everyone never ends - for circles have no beginnings, nor any ends. The circle (or rather an oval... close enough) also just so happens to be the shape we have chosen to represent the symbol for nothing - 0. For everything amounts to nothing in the end. And nothing is nothing more than a new beginning.

"That can't possibly sum it up, there has to be more to life!" I hear you say? Good.


On a related note, some fine listening:

Posted by Gio Bard Zero at 7:09 PM No comments: